Take a look at the types of Micro USB connector types and applications below, or view all GCT USB connectors. If you would like more information or to request samples, please contact GCT. 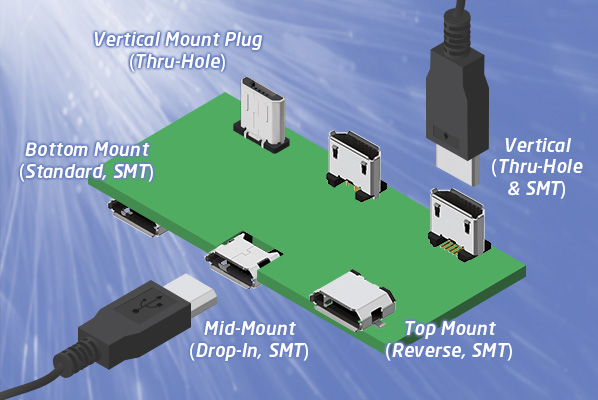 Regardless of PCB connector orientation cable plugs are designed to have the same orientation (USB Symbol facing upwards):

The reverse B type (also known as top mount B type) allows customers to mount a horizontal Micro USB connector on the top of their PCB. The standard PCB mount type is bottom mount, where the horizontal micro USB connector sits underneath the PCB. Reverse types allow the physical body of the Micro USB connector to sit on top of the PCB but still accept µUSB cable plugs in standard orientation with the USB symbol facing upwards. B type connectors are polarised, and to allow the correct cable orientation customers must have cut outs in the PCB to allow space for the cable entry locking points on the bottom side of the connector.

View all micro USB B and A/B receptacles

Thru hole receptacles in straight orientation allow alternative design configurations. GCT's range of vertical Micro USB2.0 connectors offers an SMT type with cap which allows fully automatic pick and place and a thru hole versions with a choice of lead length for use with 1.00mm (.039”) or 1.6mm (.062”) thick printed circuit boards:

USB3140 & 3145 offer the option of without mating entry face, for those designs where the customer wishes to design the lead in as part of a custom moulding. 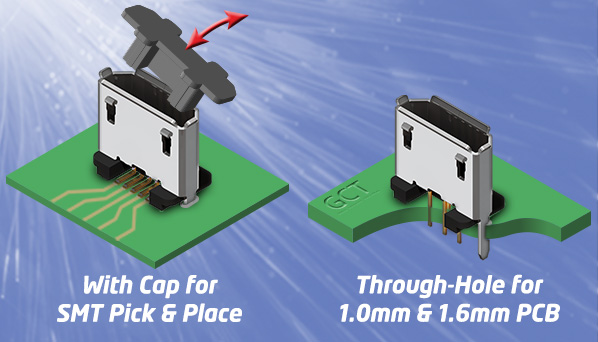 With the introduction of the USB Micro Plug, a new plug receptacle called Micro-AB was also introduced. It can accept either a Micro-A plug or a Micro-B plug.

An OTG product must have a single Micro-AB receptacle and no other USB receptacles.

View all micro B and AB USB2.0 connectors

USB OTG is a supplement to USB2.0 specification tailored for mobile applications, it augments the capability of existing mobile devices and USB peripherals by adding host functionality for connection to USB peripherals. Since USB technology has traditionally consisted of host-peripheral topology where the PC was the host and the peripheral was a relatively dumb device, these new features were needed to upgrade standard USB technology for mobile devices, new feature include:

January 2011 Two European standardization bodies have agreed to make micro-USB the standard interface port for smartphones in Europe.
Though Apple currently uses its proprietary 30-pin dock connector for transferring data and charging its iPhone, iPad, and iPods, CEN-CENELEC and ETSI agreed that an adapter is suitable for compliance.
Apple, along with mobile phone competitors RIM, Nokia, LGE, Qualcomm, Samsung, Sony Ericsson, and others are hoping to streamline mobile phone connectivity, at least as it relates to charging devices.